MATALAN is a totally unique out of town retailer, committed to providing outstanding value for money. We offer up to the minute fashion and homewares at prices up to 50% below the equivalent High Street price.

By buying direct from the manufacturer, by being situated at low cost, convenient out of town locations, keeping overhead costs low and operating on lower margins MATALAN is able to offer unbeatable value!

With all the latest key looks for the season, from modern basics to classic styles, and with a great selection of top brands including, Falmer, Playtex, and Wrangler, MATALAN offers fantastic value for all the family. You will also find clothes from top designers like Jeff Banks, Calvin Klein and Farah.

With our specialist in house design team and with stringent quality control you can buy in complete confidence. All our products are fully guaranteed, if for any reason you are not satisfied with any purchase, you may return your goods within 28 days with proof of purchase for a replacement or cash refund.

Matalan’s unique free card scheme offers a number of benefits. The card is free and as well as saving you up to 50% off high street prices*, you will be sent regular updates of our new collections and special offers, direct to your home. We’ll also let you know about forthcoming sale events. With a superb choice of the newest looks for all the family, as well as our fantastic value homewares, its no wonder Matalan is the fastest growing fashion retailer.

Matalan is one of the UK’s leading clothing and homewares retailers offering quality fashion and homewares at up to half the equivalent high street price.

John Hargreaves, the founder of Matalan, discovered the out of town retail US concept that sold a range of food and non-food products at low prices in the 1970’s. John decided to implement the same retail concept in the UK, so in 1985 the first Matalan store opened in Preston. Since then Matalan has grown significantly and by 1995 there were 50 stores across the UK. In 1997, in order to cope with Matalan’s growth, the head office was relocated from Preston to Skelmersdale along with a new distribution centre. Matalan now trades from 5 million square feet in over 190 stores.

Shopping at Matalan offers outstanding quality at prices that are simply unmatched elsewhere. By buying direct from the manufacturer and having convenient out of town stores with low overheads, Matalan is able to offer unbeatable value for money.

Matalan offers something for all the family. With an average 30,000 sq. ft per store, Matalan’s product range offers a comprehensive selection of quality homewares, ladies’, men’s and children’s clothing and footwear – all under one roof. With the latest key looks for the season, from modern basics to classic styles, customers can choose from a range of in-house brands, as well as top fashion names including Wrangler, Falmer, Wonderbra, Wolsey and Lee Cooper.

Is giffgaff the best value in the UK? We think it might be. If you fancy joining, click and order a SIM. 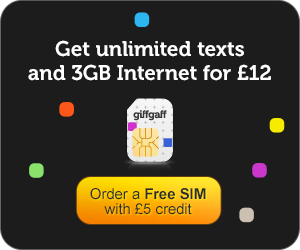